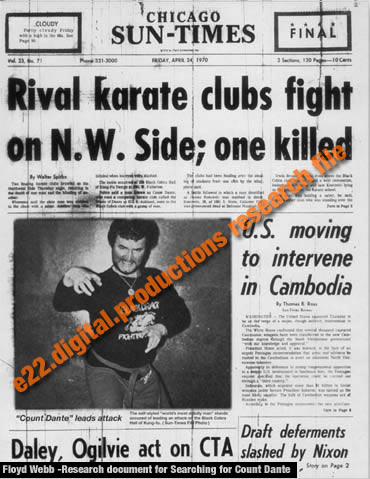 What took them there for this fateful event is still unclear. I have been told many things. It was over a woman, most likely a Playboy Bunny known as the Dragon Lady of Rush Street. It was over money. Dante was said by a few to be running a shakedown on the Green Dragons. The Green Dragons were said to be "stealing his students." A new contact has told me that Dante wouldn’t teach weapons and many of the young students wanted to learn the Chinese style in that regard, so they naturally gravitated to the Green Dragons.

Dante had his version, a friend who went along with him has a version, and Jim Konsevic’s students who went along thought they were just going for a meeting. They had no idea of the tragedy about to unfold.

No one knows what happened to set the fight into motion. I am told the door was not kicked in or ripped off the hinges to get in. They all entered through the front door and three went in further to talk and two stayed behind. The fight started soon after they came through the door. About 10-15 people poured out of a back room with weapons and the melee began.

It did not last very long. I am told that it was probably not a minute or two before Jim Konsevic had fought his way to the door that one of his students kicked off the hinges. No one knew where Dante was. It was on the way to the door that Konsevic was either stabbed, speared or slashed with a saber in the area of his carotid artery.

His blood sprayed over his students. He collapsed in the street in front of 3561 W Fullerton. One of the Green Dragons was partially blinded. The police accused Dante of doing this with a pair of nunchakus. Part of the evidence against Dante was a Sheriff's badge, nunchakus and a bayonet if I remember correctly.

One person who was there tells me Keehan had a policeman's badge and was up against a wall and was declaring he was a sheriff. In Chicago back in those days you could buy county credentials pretty easily. I asked the witness if he saw Dante with the badge or heard Dante say it and he said that he didn’t. He was in the background and someone told him that was what happened.

In another version I’ve heard, the door was slammed shut and Dante and Konsevic were isolated from the others. I have been told that Dante hid in an office and held the door shut. I was told he hid under a desk, I was also told he fought like a lion and there is a leather jacket in Fall River, MA to prove it.

There is only on truth to this event. One final reality. Jim Konsevic died that night.

Jim was only 26 years old. He was a brawler, according to Ken Knudson, he was a real good guy in spite of that fatal flaw. Knudson stopped blaming Dante it seemed, when I spoke to him almost a year ago. Knudson admitted that Jim should have known better, but he was loyal to his sensei.

Dante was extremely distraught over the death of Jim Konsevic. He had already pushed his closest friend, Doug Dwyer, away with his recklessness. Now he wasadrift. The Count needed that foil, that companion, that buddy to share adventures with. He found a new friend in mob lawyer Bob Cooley, who became his cut-buddy in the Rush Street disco scene. Later he would find it in Bill Aguiar, Jr. and work with him in
Fall River, MA.

The John Keehan/Count Dante story is like Akira Kurosawa’s “Rashoman” with its wildly different perspectives of one tragic event, or like ChicagoBlues: gritty yet elegant, fictitious yet real. It is deceptive like the malicia of capoeira -- "volta au mundo" -- around the world. The song last long after it ends and will get airplay every generation.

Still, no man should die and have no record of his passing, a simple marker on the ground. The fact that Dante/Keehan’s memory still lives makes him alive and maybe it is okay there is nothing there to mark his grave. But then again, I have not been out there lately. I think I will visit his grave again tomorrow.

Here we are 36 years later and still no real story of what happened the day of the dojo war. Why would John Keehan have led a group of young men into a dojo filled with weapons and people anxious to use them?

Real life is a bitch. The mythologies eventually implode and collapse into themselves. Whatever John's motivations that day, I remember him for the good that
he did, the lives he touched and effected in a positive manner, including mine. In one way he taught us the greatest of lessons, how to live and how not to live. And in that I would say better him than me.

Was John Keehan my hero? Yeah, John Keehan was my hero in 1964 when he befriended a few ragamuffin smart-mouthed project kidz. He was a righteous guy. He was a white guy who was a bad ass and wasn’t mean to us. He treated us like human beings. In 1964 when you were growing up black in Chicago at the rise of America's conflict with civil rights, you remember stuff like this.

Is Count Dante my hero? Well, as a person who got his ass kicked in the street many, many, many times...I knew he was right. I admired The Count’s nerve, and smiled at his bravado. As Jimmy Jones, Ken Knudson, Robert Brown and Doug Dwyer have said, that was just John. He had his way and I did as my sensei at the time said and steered clear of the Black and Green Dragons. April 24 had proved my sensei right. I had a fleeting fascination with Dante before I followed the Oyama way and then had my own adventures with mystical Chinese martial arts and Taoism. Did I answer the
question?

Rest in Peace, John Keehan and Jim Konsevic. You still live in our memories.
Email Post

Thomas said…
I was 12 when my dad took me to the Chicago Judo and Karate dojo in Hammond, Indiana. Jim Koncevic was the manager of that dojo. He was big as I remember from a 12 year olds viewpoint and had a voter which my very religious conservative dad did not care for. But he signed me up for a 2 year program with 1st year of Judo and second year of Karate. One evening Jim came in with his gi on and black belt and chose little me, I weighed 95 pounds, to spar with. I had a green belt. Did my best and Jim nicely congratulated me on my effort and enthusiasm. I never saw him again after that night in 1968 as I remember. My dad came home from work one day and told me Koncevik was killed in a fight. I remember hearing that Jim had a girlfriend who had a brown belt in judo and they would go to local bars to fight the toughest guys there for practice....do not know to this day if they were true stories. Kept my Chicago J & K student card for decades in my wallet but lost it somewhere years ago. Had Jim's signature on it.
10:40 PM

Unknown said…
i cant find any obituary or grave location for Jim Koncevic! Its like he never existed. Any clues?
12:09 AM

Unknown said…
I'm sure the stories about his fighting in bars is true...Dantes whole crew used to do stuff like that...I heard Consevic was big into that stuff and probably explains why he was at the Black Cobra Hall, that night
10:58 AM

Bob said…
That photo on the newspaper of Dante was put on much later for artistic purposes, that pic was taken around 1974 or so. The dojo war business happened much earlier.
7:55 PM

A Timeline of Martial Arts in America